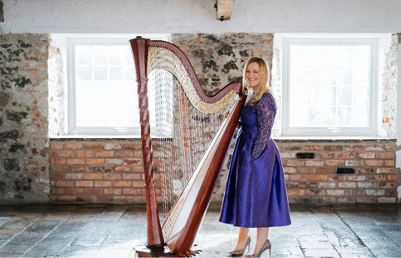 Rhian is originally from the Rhondda Valley in South Wales and relocated to Northern Ireland with her husband who has a position with the Ulster Orchestra. Rhian regularly plays with the Ulster Orchestra, National Symphony Orchestra, Irish National Opera and Belfast Ensemble, and has performed with the BBC Symphony Orchestra, Royal Philharmonic Orchestra, English National Opera and Birmingham Royal Ballet, and was associate harpist to the West End musical My Fair Lady. Rhian made her concerto debut playing the Debussy Dances with Milton Keynes City Orchestra, and later that same year with Southbank Sinfonia at the Cheltenham Festival. Her chamber music recital experience includes the Cheltenham, Brighton, Canterbury and Oundle Festivals.

Rhian is a graduate harpist of the Guildhall School of Music and Drama, London and received a scholarship to study for her postgraduate diploma at Trinity College of Music, London for which she received a distinction. A frequent prize winner in her early music career, prizes include second prize in the Junior World Harp Contest in 1994, the Nansi Richards Scholarship and runner-up in the Blue Ribbon Prize at the National Eisteddfod in 1998. Rhian is also a beneficiary of the Countess of Munster Musical Trust, The Clothworker’s Foundation, The Grace William Memorial Trust and the Craxton Memorial Trust.

Rhian’s popular classical experience includes a national tour with Il Divo and Katherine Jenkins, and her TV credits to date include the Jonathan Ross Christmas Special, The Alan Titchmarsh Show, and Channel 4’s Jewish Mum of the Year.

Recent career highlights include performing at the SSE Arena for Sports Personality of the Year, touring with Josh Groban, performing at the Proms at the Albert Hall with the Ulster Orchestra, performing with Nathan Carter for the BBC Music Day at Stormont and a ceremony honouring Sir Kenneth Branagh at the Ulster Hall.

Rhian is available for harp tuition on both the lever and concert pedal harp. From children to adults, all pupils are welcome and Rhian is happy to teach beginners or those transferring from another teacher. She is able to provide tuition for those wishing to study for their exams up until Diploma standard, as well as preparing promising pupils for higher education or music conservatoire auditions.

Acquiring Rhian as a teacher is a unique opportunity to benefit from her wealth of training. Rhian studied in her teens with the distinguished harpist Ann Griffiths who was the first British harpist to gain a premier prix from the Paris Conservatoire. Her degree in performance was gained at the illustrious London music conservatoire the Guildhall School of Music & Drama, and her postgraduate was obtained at Trinity College of Music, London where she studied with the amazing Sioned Williams, former principal harpist to the BBC Symphony Orchestra. As an experienced performer Rhian is the perfect choice of teacher for any budding solo or orchestral performers.