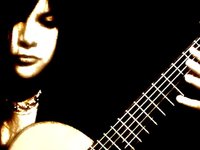 Born into a musical family, Gabriela began her first studies of guitar at age 10 with her father. She completed her professional studies at Mexico City Higher School of Music (Escuela Superior de Mùsica) in the department of the National Institute of Fine Arts (INBA). During her studies in Mèxico she obtained a scholarship by the INBA for high academic performance (2002-2010).

As a soloist, she has performed in the most important concert halls in Mexico, at festivals, tribute events, educational concerts and master classes.

During her career in Mexico formed part of the Classical Guitar Trio Ensemble with Guillermo González Phillips and Fernando Mariña, with whom she recorded the homonymous album 3nsambl3 Mexican Music For Guitar (2010) as a tribute to the 200th anniversary of the War of Independence and 100 years of the Mexican Revolution (Ediciones Pentagrama S.A. de C.V.).

At the present time, participates in Classfolk, the fusion duo project with guitarist and sitar player Daniel Perskawiec. With a musical concept that combines classical music with folk music from Latin America, Poland, India and Africa. The duo has performed in Barcelona, Spain (2011), and Belfast, United Kingdom (2012).

Gabriela has 8 years of extensive teaching experience as a tutor of all age groups. She offers group and individual tuition, master classes and also teaching children with the Sonia Michelson’s system which combines the Suzuki and Kodaly principles into a developmental classical guitar method for children of the age 3-10.