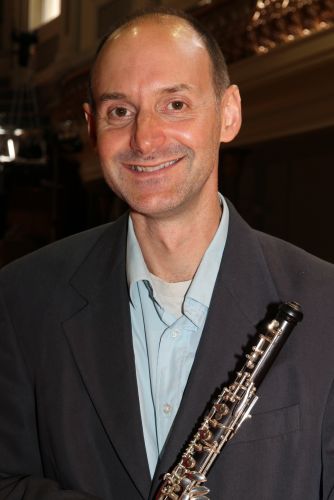 Christopher Blake was born in Brisbane, Australia, and started playing the oboe when he was 11 while living in Scotland. Three years later he won a scholarship to study oboe at Douglas Academy Music School with Philip Hill (Principal oboe with the BBC Scottish Symphony Orchestra). When he was 15, he won the Scottish and Northern Ireland woodwind final for the BBC competition, Young Musician of the Year.

Between 1984-88 Christopher Blake held a scholarship to study at the Guildhall School of Music and Drama with the oboist David Theodore (Principal of the London Philharmonic). During this time he gained valuable experience playing Principal Oboe with the Young Musicians’ Symphony Orchestra – he was soloist while on tour to Italy.

In 1988, Christopher Blake began his professional career, working with the Scottish Chamber Orchestra and the Orchestra of the Royal Opera House, Covent Garden. At this time he auditioned for Principal Oboe of the Ulster Orchestra and was appointed a few months later. It was through the Orchestra that he met his future wife Claire, one of the Orchestra’s first violins. Christopher and Claire now have two children, Anna aged 16 and Alex aged 12 .

Christopher’s concerto performances with the Ulster Orchestra include the Richard Strauss Concerto with Vernon Handley, the Mozart and Strauss concertos conducted by Carlos Colmar and recently the Vaughan Williams concerto conducted by James Macmillan. He’s also performed the  Bach Double Concerto with ex-leader’s Lesley Hatfield and David Adams and more recently with the Ulster Orchestra’s current leader, Tamas Kocsis. Christopher also loves playing chamber music and has played in various groups within the Orchestra including wind octets, quintets, and for the last two years has appeared with the Orion Duo and Praeger Oboe Quartet.

Christopher has played guest Principal oboe with many of the U.K’s Orchestra’s including BBC Symphony, BBC Philharmonic, The Halle, The Scottish Chamber and the Philharmonia in August 2011. He is about to undertake a European Tour with the Academy of St. Martins in the Fields directed by Murray Perahia.

He likes to devote some of his time to gardening- he has a passion for subtropical plants, and has an extensive collection of Palms, Tree ferns, Bamboo’s and succulents. Christopher has supplied four or five different species of palm to the Palm House at the Botanic Gardens, Belfast. His garden was featured in the BBC TV series ‘Greenmount Garden’ in 2007.